Continuing my Adele themed baking puns with my baking updates!

So what have I done since Rolls-ing in The Deep? A few things to the point where they’ve become a regular part of our week here at Pixie HQ. Without further ado… 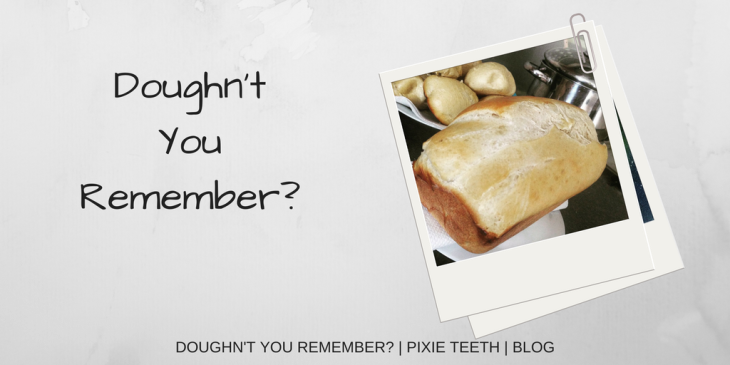 One of the first things I did once I got confident with making the bread rolls was changing up what I did with the recipe.

To save you having to flick back to my last post to find the bread recipe here’s the link to the BBC’s Good Food’s “Basic white bread”. It’s a great basic one to work around with so I took that chance to flavour it with cocoa powder after making half the recipe’s worth. During the combining stage, I added a few tablespoons until there was a good even dark colour throughout the dough. This did make the dough drier than usual as I didn’t compensate with additional liquid, but I tend to make a wetter dough so it worked out well for me.

After the usual kneading and proving came the change. I’d bought a loaf tin from good old Dealz (seriously Pound Land) and greased that up. The next part took a while. After ‘waking up’ the dough with a light bit of kneading I tore off small chunks, then pushed either a broken up chocolate button or washed glace cherry into it. Once filled it was then rolled in a mix of cinnamon and brown sugar, then duly placed into the tin.

There was a slight issue when I had left it out on the side to prove a bit longer than I should have. By that I mean an hour longer and it was spilling out of the loaf tin! But that was fine! Before popping it into the oven as per the original recipe I poured over melted butter with cinnamon mixed in.

I’d love to say that I had pictures of us eating it- but it was gone too quickly! Easily went down a treat!

He’s small and very helpful- not to mention delicious!

Steve, are you ready?? #sourdough#baking

He’s my sourdough starter, made from wild yeast and using white flour. I found on a few forums that it’s unusual for a starter to come so quickly. I think Steve was about nine days on when I took this picture before his first bake.

Can I make my own Steve?

Why yes! Of course! It’s rather simple, to be honest.

Find yourself a clean jar, a glass one is perfect, but something you can sterilise but also cover. As you’ve seen I use a plastic freezer bag to cover Steve but if you have a lidded jar that’s just as good.

Add an equal measure of wheat and flour, I used 30g of each, cover and pop in a warm (not hot) place. Then each day take a portion out, between a quarter to a half, before adding the wheat and flour. Then repeat, once you start to see bubbles that’s when the yeast has arrived- give it about a weeks worth of feeds after that before you use it.

A couple of tips I’ve picked up along the way;

To build up Steve I sometimes don’t take out a portion, some recipes call for a lot of starter. I’ve also started to tweak the ratio of water to flour. So to achieve a close crumb effect I want a lower level of hydration (others strive for an open crumb), so instead feed him a ratio with a higher flour amount. So 15g of water and 30g of flour. We’ll see how that works out!

So what did Steve go into?

It’s a bit of a staple now, we have beer, wursts and now freshly baked pretzels. It’s nice to be able to season them with what I like, and they to be much fresher than the bought ones.

They've not really browned all that much but they smell great!! #sourdough #baking #pretzels

Steve has also featured in a wonderful loaf:

Which went on to make amazing French toast!

The recipes I make are mainly from King Arthur Flour- and depending on who you talk to it’s not considered “real” sourdough. For example the recipe for the loaf, here, there is commercial yeast used as well, as the sourdough starter is used more as a flavouring rather than a means of rising the bread. Someone in the comments even worked it all out so you can use just sourdough levain instead of the mixed version.

Either way, it tastes great!

But how’s your baking getting on? Let me know!