As the snow is still clearing (in some parts of Ireland I’m not over exaggerating) and as we approach the Spring Equinox thought it was a good time to put out a knitting update. The entrelac scarf has grown, it is so long, so thick, and so heavy it unravels itself some times! Though, you may have seen from my Instagram posts:

Knitting. In bed. With a cold. With Sheens. #knitting #knittersofinstagram #interlac #pusheenplushies #stormyplushie

I’ve gotten the hang of this particular technique- so much so I haven’t referenced the book in some time. I’m rather happy to say that the scarf already has a home lined up. At the end of the month it’ll be presented (buttoned, weaved, and finished in all it’s glory) to Belov’d’s sister. I’m sure she’ll find good use for it in the few chilling morning we have left in the northern hemisphere this side of Summer!

As you may or may not remember I’m going to knit a jumper this year. Yes. Yes, I will. It’s part of my Resolutions are For Screens for this year- instead of doing mindless resolutions I’ve told myself I have goals. Yep, one of those is the jumper.

So I picked up this book,  “You Can Knit That, Foolproof Instructions for Fabulous Sweaters” by a Amy Herzog, and Amy is beyond encouraging. After reading my way though it I came across her suggestions at the end. One of which was knitting the Blaze Cardigan for your first jumper/cardigan item. And I have to admit it’s beautiful:

I'm going to do it! I WILL knit a jumper this year! #knittinggoals #knittersofinstagram #knittersofig #knittersoftwitter #knitting #yarn #wool #jumper #cardigan #pullover #sweater

But I’m so intimidated by it. Not by the instructions, or the book- they’re very clear and the diagrams show how everything places together. It’s all very logical. Unfortunately, it’s more of I’m worried that it won’t work.

Being daunted for no good reason is a speciality of mine. So I told myself it was time stop and reconsider. 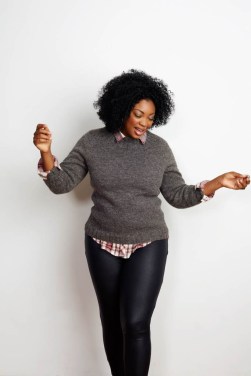 I settled on a raglan jumper, Heublein Pullover, to the photo to left is one of the official photos (I love this model btw she is beautiful!). It’s knitted in four parts- back front and two sleeves. Then sowed up- which to be fair I need to practise my makeing up! Anyway, this makes things nice and straight forward. Now to figure out the wool.

One of my pet peeve when it comes to these knitting books is the yarn. They never really state it’s weight. Most of the time they give the brand name of the yarn that was used- which is lovely. It’s also not always that feasible. For example Amy here is based in the US- it’s not all that likely that the same wools she had available to her are to me. So I’m going to have to do some investigating to find that out.

Now on to the cost element of it all. Now I wanted to do the Blaze Cardigan, it would work well with a lot of the sleeveless tunics and tshirt I have. It uses two strands of yarn, which is one of my favourite things to do. But the cost was one of the things that worried me. What if I screw up? What if it ends up being one of those things that laments in a bag cos I’m too scared to continue you it. I want to do it, but am I capable at this stage? Leaning more towards the no side. Hence the move to the pullover.

If you want to keep tabs on my knitting, random selfies, and other escapades on a more regular basis- why not follow me on Insta? I’m @frandobagel.